Enclosed malls, especially in secondary and tertiary markets, are concepts that are becoming functionally and economically obsolete. This has been increasingly so in the last few years, but is expected more this year and in future years to come. 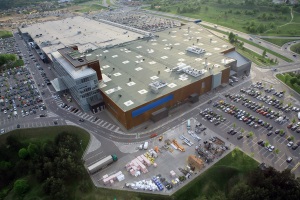 There are several reasons why this trend is on the rise, but among the major reasons:

Are all enclosed malls failing?
Ted Pfeifer, retail expert with Landmark Commercial Realty, Inc., believes not all malls are on the chopping block.

“Successful malls can generally be found in the sunbelt states and the major northeastern cities like New York, Boston, Philadelphia and DC,” Pfeifer adds. “Even in these areas, some older concept malls, which now have too much retail area, are re-inventing themselves and their bricks and mortar configurations.”

Regarding southcentral Pennsylvania, he points out that the Park City Mall (Lancaster County) and the Capital City Mall (Cumberland County) are doing quite well.

“In terms of a short driving distance from the area, the King of Prussia Mall in Philly, the Christiana Mall in Wilmington, Delaware and the Towson Mall in the North Baltimore area are healthy as well,” says Pfeifer.

Repurposing of malls
Pfeifer believes owners of the troubled, and even presently successful, enclosed malls are being very aggressive in formulating alternate uses for all their major department store space, which may vacate or close in the coming years.

Pfeifer adds, “An example of alternate uses would be the re-tenanting of the Capital City Mall. Years ago, PREIT, the owner, started the process of repurposing and reinventing its enclosed mall. Dick’s Sporting Goods replaced the vacant Sears and a smaller Sears Appliance Store was added, with smaller spaces of the Old Sears footprint being available for lease.”

He indicates that in previous years, PREIT replaced older tenants which had not been renovating and/or were not aggressive in marketing with more up-to-date tenants and uses.

Demalling which entails a tear down of the existing vacant department stores, and perhaps adjoining stores, and rebuilding new smaller format, outdoor “village” shops with walkways and storefronts is also an example of “repurposing.”

Pfeifer adds, “If re-tenanting or demalling isn’t a repurposing option, a total demolition or redevelopment is another route to take and the most expensive.”

What does the future hold?
Pfeifer believes no one really has a firm, clear-cut answer to this question, other than  enclosed malls are mutating to the economic times, creating hybrids of all sorts.

He adds, “But in general the enclosed mall of the past – the major tenants, the configuration of existing and new malls, will be widely varied as the market conditions – nationally, regionally and locally. And it will occur faster and faster in the next three years.”

Pfeifer thinks this change has been long overdue, but enclosed malls of the future will be designed, right-sized or renovated to the times, and as a whole, will be an exciting and viable part of their respective communities.