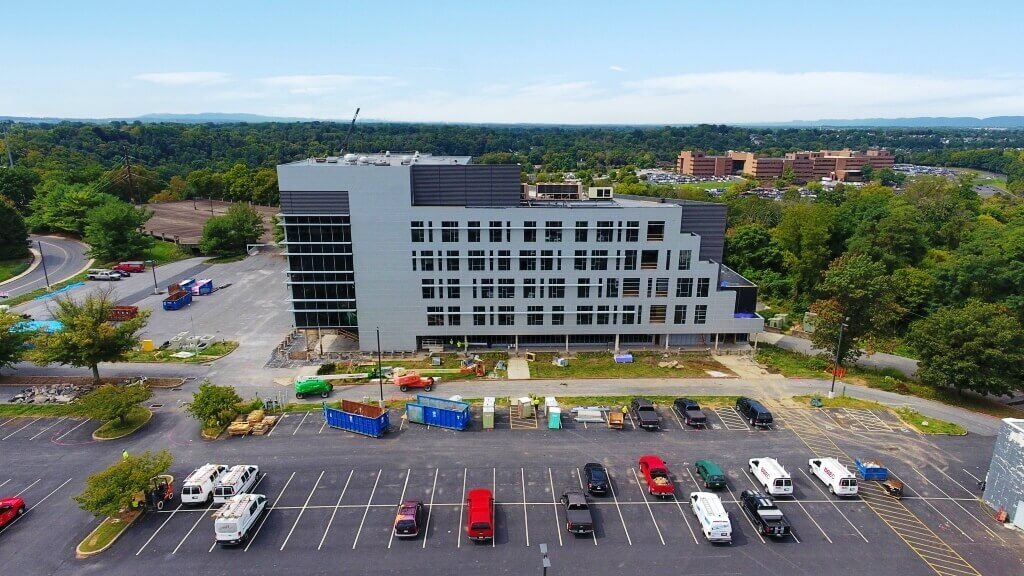 Select Capital Commercial Properties (SCCP) began making plans to redevelop the 215,000 square foot property into new Class A office space in late 2018. The property is located near the Geisinger Holy Spirit hospital campus, about a quarter- mile from the Route 15 Camp Hill Bypass.  In August, the property shell was enclosed and interior renovations commenced.

“The property has been undergoing a complete overhaul down to the structural steel,” stated Grace.  “The redevelopment project has made the property completely unrecognizable.  It will provide Class A office space options in the Camp Hill sub-market which is in high demand.”

Landmark Commercial Realty has assisted in securing several anchor tenants for the building, including Select Medical Holdings Corporation (NYSE: SEM) and the Law Firm of Thomas, Thomas, & Hafer – who will be relocating from their Harrisburg central business district office.  The building is approximately 50% committed at this time.

Grace also indicated that SCCP and Landmark are well on pace with their project absorption goals as they have a handful of deals signed and several other prospective tenants are in the process of negotiating lease proposals.

Select Capital and Landmark have been working together for nearly two decades on real estate projects throughout Central Pennsylvania.  Select Capital has redeveloped and renovated several iconic downtown central business district office properties in the City of Harrisburg. The company has also developed a Class A suburban office park at Executive Park West in Mechanicsburg that encompasses nearly 300,000 square feet. A park expansion of 200,000 square feet is currently in the engineering and design phase.

About Landmark Commercial Realty Inc.
Landmark Commercial Realty Inc., established in 1988, is a full-service commercial/industrial brokerage firm headquartered in Harrisburg, Pa. that focuses on the South Central Pennsylvania region and completed deals in excess of $395 Million in 2018. Landmark is the central Pennsylvania affiliate office of TCN Worldwide which serves more than 200 markets globally with 160+ offices and more than 1,500 brokers and salespeople.

About TCN Worldwide
TCN Worldwide, a consortium of leading independent commercial real estate firms, provides complete integrated real estate solutions locally and internationally. Representing more than 200 markets collectively worldwide, TCN Worldwide member firms are leaders in their respective marketplace and serve as the foundation for our organization’s success.  TCN Worldwide ranks as one of the largest service providers in the industry, consisting of more than 5,000 commercial real estate professionals in 160+ offices across 24 countries, and collectively representing more than $58.6 billion in annual transaction volume.